Hey internets.  Though not an official Hearts Bleed Radio production, I thought I'd take a hot minute and sit down with Mark Gurarie to talk about the show that his band, Galapagos Now! is playing this Friday with one of my bands, Big Quiet.  Galapagos Now! has been on the scene since way back in 2008, the brainchild of Mark (bass/vox) and Joe Dairy (aka Jeff Waite, guitar/vox).  These days they are playing with Thomas Maiwald on drums...

Hearts Bleed Radio: You guys are a lot of fun to see perform, and you have a full length album out, The Beards of London, to me it feels almost like a concept album. When is the Broadway show coming?

Mark: Well, we have pirate costumes and smoke machines and, lately, access to a sailboat, so I would venture to guess that a musical production is forthcoming in Kansas City by the year 2020. They have a community theater on Broadway that is known for its stage production, I am told. 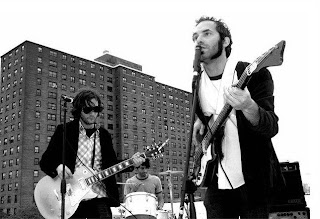 Outside rocking is just around the corner, WE SWEAR.


HBR: How do you guys write? Does someone bring in like, a verse/chorus structure? Or is it more collaborative? Or a mix?

Mark: It is a little bit of both, I'd say. Jeff is quite a bit more prolific as a songwriter-- he put out quite a few solo records before the band existed and has been at it as a kind of basement svengali for quite some time-- so many songs are our interpretations of his structure, but he and I have worked together on quite a few things. Also, I'll chip in some uglier punk-ier vehicles as well. The thing about the process for us is that we are typically lyric and concept driven. We appreciate and try to make songs as constructions or structures. Arrangements predominate over jams, I guess...

HBR: Yeah, I think that's why I get a theatrical feel from the album. It almost changes parts like, y'know, because the characters are doing something different or whatever... Not really like the "12 songs, each verse/chorus/verse/chorus/bridge/chorus" thing that you expect out of a rock album.
Let's talk about influences for a second.  Seeing you guys play, I heard a lot of Dead Kennedys/Minutemen, kinda punk/punkish indie. Is there an Oingo Boingo influence there too? Or do you guys just hang out with a lot of drunk pirates, and like, write about what you see?

Mark: Wham! more like it, I think. Yeah, as far as my own writing goes, I am certainly channeling a punk, post-hardcore sound: DK's and the Buzzcocks and whatnot. It's music driven by a kind of sardonic oppositional stance, but I also try to inject humor and satire into the admixture. I think Jeff is a little more in the vein of like creepy Americana with his writing-- it cuts more to the core and is generally darker. The man loves his Townes Van Zandt and Tom Waits and such. Collaboratively, we meet in between these poles- and, yes, we've stuffed quite a few drunks who've claimed to be pirates into our ship, mostly because they tell great stories. 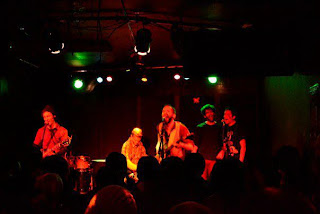 The guys get by with a little help from their friends...

HBR: So your next show is 4/5 at Don Pedro. You're playing with my band, Big Quiet, and also, Warmth, and Wildhawk. What can we expect from those guys?

Mark: Well, Wildhawk is on a psych-folk tip-- songs with wider spaces, crazy guitar/electronic effects. It's essentially the solo project of Matthew Welde, a very tall guy who has recently moved here from San Francisco. You can certainly get a bit of that West coast vibe in his music-- whatever that means-- I hear oceans and like "electric Kool-aid" when I hear his stuff. Warmth is heavier-- a band that is driven by intelligent, sick grooves that get aggressive at times-- the type of stuff that sends most half baked indie rockers back to guitar center for a refund, as it were. This is a band that is not afraid to let you have it for like ten minutes. They are not trying to charm you with a couple pop songs. Also, I am very pleased that we got Joe Cocozzello to do some stand up comedy between the bands. The guy is a legend in the underground comedy circuit of Bushwick, taking brash, honest commentary to the next level. He tends to riff about the most important things in life: drugs and sex.

HBR: Yeah, I was going to ask you about him. I'm kinda surprised that more musicians and comedians don't get together for shows... and throw video artists into that as well. Do you guys have any other dates coming up that you want to plug? Any new recordings due out in the near future?

Mark: We are putting the finishing touches on an album we recorded while on tour in England last summer. The working title is "I do not like what you are wearing," but that is not definite. We are on a UK indie-label, Habit Formed Records, and we plan on releasing the album with them in late Spring early Summer. As for shows, our drummer has to take care of some business in his native Germany for the rest of April, but we are looking at putting something together here in NYC in late May or early June. Our major task, at the moment, is trying to put together a proper European tour for this August. We'd like to get back to Ireland and England-- we toured there for a couple weeks last Summer-- and are scoping out shows in Germany, Austria and possibly France. In the mean time, we are trying to put together some new material, you know, to keep it interesting. Oh and I am doing a solo acoustic set at the Ding Dong Lounge on April 9 at 7 pm. That'll be "drunk" by which I mean "interesting" by which I mean "drunk"...

HBR: Nice. Well, I'm excited for the show! Thanks for taking the time, and I'll catch you on Friday night!


We certainly hope you can make it out to our show, here is the even info on Facebook.


Here's where one goes to listen/download The Beards of London ---> Bandcamp.


And remember to "like" Hearts Bleed Radio on Facebook, so we can keep you updated with shows, bands, food, sports, politics, and random creative writing.