Friday March 22nd is a debutant ball as far as Hearts Bleed Radio is concerned.  We are unveiling ourselves to the world, and while many things are still uncertain (should i use CAPITAL letters?  Should it be solely music based?  How do I trick a college student into being my intern?), we've got the line-up set, and we're ready to talk to the bands!

First up is Shawn Mishak (guitar/vocals) of Kid Tested.  I sat down with Shawn on Gchat the other night (minutes before he had to host an open mic night), and here's what transpired...

Hearts Bleed Radio: Let's go back in time for a second... Kid Tested has been together for over 10 years. Have you guys been active the whole time? Same three dudes?

Shawn: We have been active since roughly 2001. We are on our 4th drummer, and our second bass player. the new drummer, Jim has been with us for over a year and Dom has been with us for about 5 years..fucking drummers...
HBR: If they don't die, you consider it a victory and move on. I assume its really hard to find a drummer everywhere, right?
Shawn: I consider all the people I've had the opportunity to work with a blessing and a privilege. Drummers that don't get sucked into drugs, marriage, or double bass pedals can be tricky. 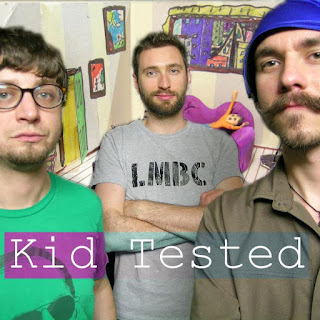 HBR: You guys sound like you listened to a lot of the stuff I grew up with. I hear Sebadoh/The Wipers/Sonic Youth... Are those influences?


Shawn: Well, kinda funny, we get those comparisons, Wipers, I know from Nirvana, but never listened to them much. Sonic Youth, I remember a friend gave me Daydream Nation when I was very young, and I really didn't like it, I was listening to Metallica, The Beastie Boys, Nine Inch Nails, and The Violent Femmes which was the extent of "the alternative section" when I was that young in Amherst, Ohio. I didn't understand that Sonic Youth record, and I think it is like that with something that has a new sound. I actually gave that tape to a friend and he didn't like it either and gave it back to me and i listened to it and liked it then. Nirvana was the big one after that. I actually shared a recreational cigarette with Lou Barlow a couple months back and had maybe one Sebadoh record that I liked. I was joking around with him and said, "We kept getting compared to and in an interview with the Cleveland Plain Dealer I said, yeah that's because we're both Sonic Youth rip-offs." I didn't really mean it, and was kidding, but he gave me a look that told me that he didn't think that it was funny, but he is a super cool and talented cat, and was very cheerful and grounded. I have only seen Sebadoh once in 2011 at The Grog Shop, I could see why the comparison was there, but never considered them a huge influence.  Sonic Youth, were certainly an influence, but Nirvana more so..

HBR: I think your voice sounds similar to Lou's, perhaps that is just a natural coincidence. You guys are playing a gig in Brooklyn and a gig in the city at the end of the month. Are you on like, a proper tour? Where else are you playing?
Shawn: That's cool, Lou has a cool voice so I'll take it as a compliment. This will be our third time playing New York in support of the new CD, "Lost on Purpose." We have also toured in Boston Chicago, and Michigan so far. We will be also hitting Philly on the way back to Cleveland, then we have another CD coming out in May which we will be going on a larger tour in the spring heading all the way to Boise, Portland, Seattle, Vancouver as the ultimate goals but will also be hitting Chicago, Milwaukee, Minneapolis and some other places in between, on the way out there. We have been kinda' "weekend warrior" touring as of late due to peoples work schedules and working on the new cd, 8 tracks of which are done.. 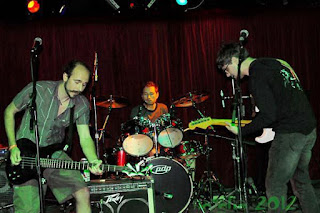 Kid Tested, mid-set in the Mid-West.
HBR: What is special about Cleveland?  Who are some Cleveland bands that we should be listening to.
Shawn: We are completely independent and do and pay for everything ourselves... it's really rough, but then there are so many awesome people that help us out, and we are so grateful for the awesome bands we have been able to play with. In Cleveland there are so many amazing bands! Currently my favs are: Goodmorning Valentine, Megachurch, Goldmines, Dead Sweaters, Lea Lou and The Two Left Shoes (who play in NYC often), This Moment in Black History, Gypsy Spyt, Palaces, HomeOwners, The Village Bicycle...  the list goes on. One huge thing to watch out for is this years' Lottery League! I'll let you do some research to see what this is as it is crazy and kinda' difficult to explain in brief.
HBR: I'll have to check those guys out! Do you have an exact date for the release of the full album?
Shawn: Not for the third one, but our second one was in October and we actually player with a New York band called Freshkills who just played their last show. I will keep you updated, but we will be leaving for tour that day after Memorial Day so we hope it will be finished by then...fingers crossed.
HBR: Nice! Well that about wraps it up on my end. Thanks for taking the time to do this.  Have fun at your open mic night.
Shawn: Thank you for all your help, We are very much looking forward to this time around, and two more Cleveland bands, are The Safeties (members of Machine Go Boom), and Little Bighorn (members of Coffinberry), those two bands might be hard to find online but their former project were definitely a huge local influence, and put out some very impressive albums year back. Thank you again, and keep your wits about you in these turbulent times...cheers!
I'm not quite sure what Shawn meant by "these turbulent times", but hopefully he's not referring to the 3/22 show, which should be incredible.

Here's more information on the HBR showcase at Legion on 3/22.

Here's Kid Tested's other NYC show at Lit Lounge.  (our friends Dialogue from a Silent Film are on that bill too.)

And here's a link to Kid Tested on Facebook.