Summer Saints are an absolute blast to see live, and we're super excited to have them for the first Hearts Bleed Radio show.  We're talking loud, instrument swapping, rhythmic AND melodic, all out rock party goodness.  I spoke with Mark Karges, the sometimes singer, sometimes drummer of the band...


Hearts Bleed Radio: So I saw you guys at Cakeshop in January, when you played with The Planes. I would consider you guys to be a "high energy" band (as would Jeremy from Tenrec). What's you mentality like before a show? Nerves?


Mark: I get some nerves, but if I don't, I feel I don't play as well. Plus we all have a few beers too.


HBR: That always helps. Have you ever had two many?

Mark: Sometimes, but we try to behave as much as possible before playing. We're only human, though.

HBR: It's hard to be in a bar, and like, be waiting to play, and not drink quickly. I was listening to "Road to Hoe" and I hear a lot of Dinosaur Jr. in that track. Are they an influence?

HBR: Who are some others?

Mark: Husker Du, GBV, Swell Maps... We tend to like fast stuff with some melody.

HBR: Indie has really drifted away from some of it's "punky-er" roots over the past decade. Does that affect what you do? Even if you're just explaining to someone what you sound like, you can't just really say, "indie" these days.

HBR: Haha, love it. I do to. Say that and hope they don't ask a follow up.Something I like about you guys is the tightness of the rhythm, and the importance it plays in the songs. Do you you guys write that as a group?

Mark: All three of us contribute to the songwriting. Initially they'd start off fully-formed, with one of us bringing a song to practice, but as time has gone by I think the process has gotten more communal, especially with arrangements and stuff like that.

HBR: You just posted a track "Made The Circuit" on SoundCloud. Should we be expecting more tracks any time soon?

Mark: Yep. We've got a few from the same session that just need vocals.

HBR: How did you record them?

Mark: Very poorly, with our pal Billy's eight-track that Joe stole out of his bedroom when the two of them were living together.

HBR: Haha, sounds pretty tight though, do you do the band together live, and then overdub the vocals?

Mark: You got it. None of us are very good singers, so it makes sense to overdub instead of spoiling a perfectly good instrumental take with our caterwauling. 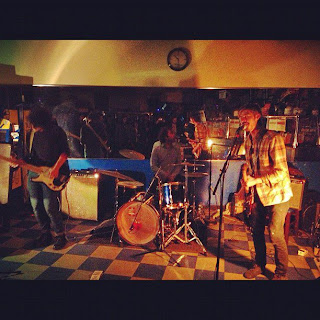 The Saints get down right un-saintly...

HBR: You're playing at Legion on 3/22 with us. Do you guys have other upcoming shows?

Mark: Hopefully early April, some details need to come together.

HBR: Are there any local bands we should be checking out? Anybody you've played with that you really like?

Mark: Call of the Wild, will hopefully see them later tonight.

HBR: If you had to choose.... Would you play Guitar or Drums? I actually feel bad asking that question. Don't answer it...

Mark: Drums, because Carl sucks at them...

HBR: It's important. As soon as you stop eating several pies a week, your body stops being able to process it, and it turns into fat. It's science.

Mark: Got an eggplant pie that will blow your mind...

HBR: Haven't been out there yet. Do you live in Ridgewood?

HBR: Is Bushwick "over"?
Mark: Haha no, lots of fun places to play and lots of good bands to see.

HBR: What's the best spot to see a show in NYC?

HBR: Me Too.  Maybe I'll try and throw a Hearts Bleed Radio show there.  Thanks for taking the time.

Summer Saints have some raw tracks up on SoundCloud, you can check them out here.

And here's the info for the show!